Fascinating footage has given a behind-the-scenes glimpse at how pioneering surgery is performed on a foetus while it’s still in the womb.

Dr Wael El Banna filmed a procedure he performed on a baby in utero to repair the beginnings of the birth defect spina bifida.

The clip shows him pulling the fluid-filled womb out of the mother’s abdomen, draining liquid through a tube and performing intricate surgery on the baby inside.

Dr El Banna, from Egypt, said his operation was the first of its kind to be performed in the region and mother and baby have been ‘doing great’ since the op this month.

He revealed the procedure to MailOnline just days after a mother in England spoke of her delight at having a healthy baby after the same operation – the NHS is preparing to start offering the op later this year. 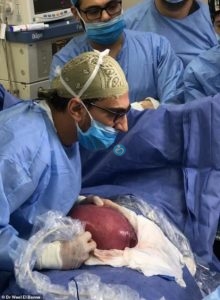 During the operation, Dr El Banna (pictured operating) pulled the mother-to-be’s womb out of an incision in her abdomen in order to get better access to the unborn baby

Dr El Banna and a team of 11 medics completed the five-hour operation on Thursday, April 11, at Gohar Hospital in Cairo.

The unidentified patient, a 36-year-old woman from Saudi Arabia, was 26 weeks pregnant at the time.

Dr El Banna, a 38-year-old esteemed gynaecologist, told MailOnline: ‘During her antenatal ultrasound she was discovered to have a defect in the back of her foetus.

Bravely she decided to go through the battle of open fetal surgery and refused the abortion option totally.

‘Her words were so touching – “I know that he will suffer and I will do anything to help him”.’

The baby had been found to have a hindbrain herniation, a deformity in which part of the brain is pulled out the back of the skull by the spine and down the neck.

This can cause spina bifida, a condition which begins before birth and develops when nerves are exposed and left at risk of damage. 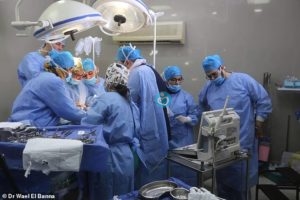 Dr El Banna was part of a team of 11 medics  including neurosurgeons, nurses and who worked together on the five-hour operation in Gohar Hospital in Cairo, Egypt 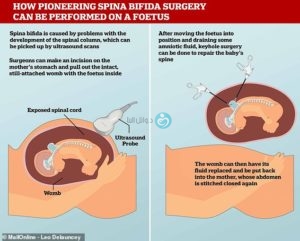 During the pioneering spina bifida surgery, surgeons drain some of the fluid from the amniotic sac and try to repair the spinal column to protect exposed nerves which can cause disability

When nerves are damaged it can leave sufferers with weak or paralysed leg muscles, bowel or bladder incontinence, or reduced sensation in the lower body.

It can also lead to a build-up of fluid in the skull which can cause further brain damage and potentially learning difficulties.

In the UK, as many as 80 per cent of parents who find out their unborn child has spina bifida opt for a termination.

In this type of pioneering surgery, doctors are now able to correct malformations in the spine in the hope of protecting nerves and preventing crippling damage.

‘We opened the abdomen and got the womb out,’ Dr El Banna said.

‘We located the position of the foetus and then manipulated his body to face the small opening that we made in the womb.

‘Then [we] drained some of the fluid around the foetus and kept the foetus under monitoring through the whole surgery.

‘The defect was repaired successfully and the fluid was injected back around the foetus and the womb and abdomen were closed.

‘She [the mother] was put in a strict post-operative protocol and, thank God, the foetus and the mother are doing well.’

The footage of Dr El Banna, who has trained at King’s College London and a clinic on Harley Street, shows him pull the woman’s swollen womb out through an incision on her stomach.

He works with a team of medics including nurses, obstetricians, neurosurgeons and a paediatrician.

Dr El Banna feels the football-sized pouch to find where the foetus is and moves it into a suitable position for surgery, away from the placenta to avoid damaging the organ. 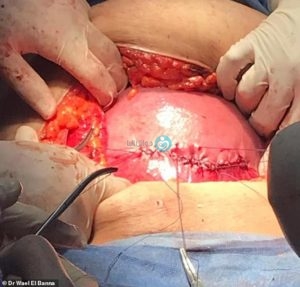 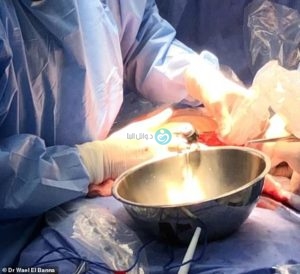 Dr El Banna, pictured draining amniotic fluid through a tube called a trocar, said there are ‘lots of things which could go wrong’ with the relatively new operation 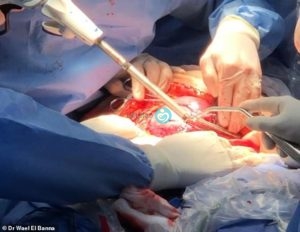 The procedure Dr El Banna filmed is the first of its kind to be performed in the Africa and Middle East region, he said – he believes it will be the future of spina bifida treatment

‘This operation has been performed for years in the US and children have better walking and less urinary and bowel incontinence.’

Dr El Banna said bleeding and blood clots are possible complications of the surgery, and the foetus’s life is at risk because the womb is inflated with air for the operation.

But his procedure went well and a scan seven days afterwards showed the baby’s spine now looks healthier and the mother was well and walking around after 10 days.

And this type of in-utero surgery, best performed between the 22nd and 26th week of pregnancy, will be the way forward for surgeons in the future, Dr El Banna said.

Earlier this month, English mother Bethan Simpson, from Essex, revealed her delight at having a healthy baby after she had the same surgery in London in January.

Her operation was performed at University College Hospital and a team of 20 medics spent five hours working to save her baby from spina bifida.

Three months after the operation, on April 1, 26-year-old Mrs Simpson gave birth to her daughter Eloise, conceived through IVF, and was told she was healthy.

Mrs Simpson, a nurse, said: ‘Her legs kick, her toes curl. Bless her, she doesn’t even know the impact she has had.

‘It’s a miracle, that’s the only way I can describe it. We may have been through a lot, but I’d do it for Elouise all over again in a heartbeat.’

Mrs Simpson was the fourth woman to have the procedure in Britain, which was paid for by charity funding – it is set to become more widely available on the NHS this year.